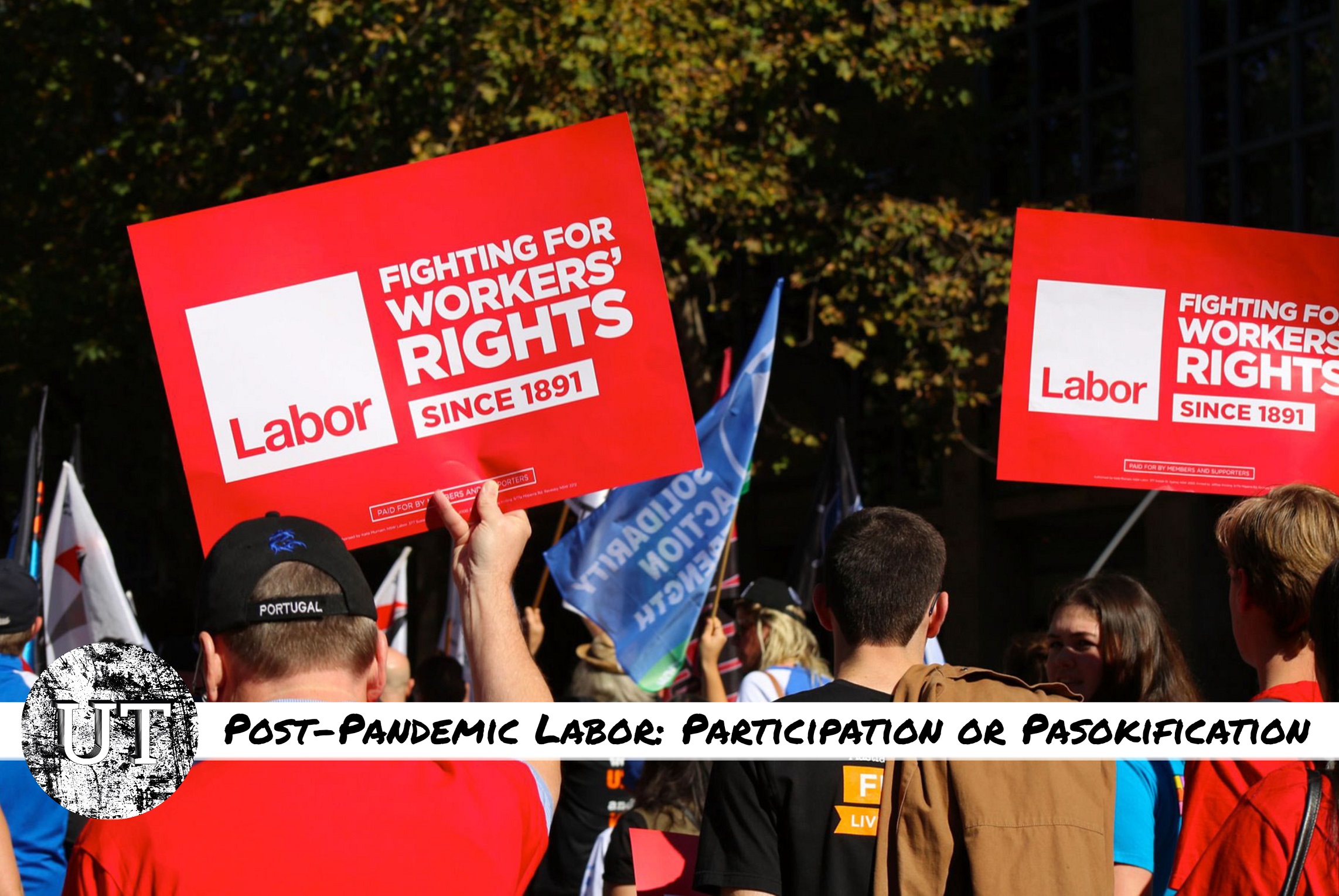 The COVID-19 crisis has highlighted the limitations of the Labor Party’s organising habits and traditions. At precisely the moment we need to be growing and mobilising our movement the structures and rules of our Party are isolating rank-and-file members. To address both the immediate crisis and the long term decline of Labor’s primary vote we need to reimagine the way we organise. The decline of socially democratic parties across the globe is a timely reminder of the challenges facing our movement, and why we should be attentive to social connection and place based communities in the everyday practices of party organising.

The European Experience: Why We Need Strong Rank-And-File Engagement

The decline of social democratic parties in Europe provides an instructive example of what happens to centre-left parties when they neglect their base. European Social Democracy is afflicted with a malaise. The primary vote of most of the major social democratic parties has been trending down for decades, and the Australian Labor Party is not immune to this same condition. In a number of countries, this decline has resulted in a catastrophic electoral event that has destroyed the traditional social democratic party as a viable alternative government. This is the so-called ‘Pasokification’ phenomena.

In December last year I attended a conference presentation by Ben Hugosson, the Organisational Ombudsman of the Swedish Social Democtratic Party (SAP). He identified the vulnerability to Pasokification as arising from a parallel decline in party membership. The central thrust of his argument was that rank-and-file membership was a proxy for the level of social embeddedness of political parties. He argued that the decline in a party’s primary vote has been less pronounced when its membership has remained high as a relative proportion of the electorate. Parties that have allowed their membership to decline have been more susceptible to the Pasokification phenomena.

Hugosson’s observation is a powerful insight that should be heeded by NSW Labor. Labor’s primary vote is in terminal decline in some areas of NSW. You can see this decline has occurred in areas where the Party membership base is also declining. Country branches are struggling. Their membership is aging. The Party’s connection to these communities is weakening. The consequence has been the eclipse of Labor as the natural alternative to the National Party in the bush. Now voters turn to independents or the Shooters, Fishers and Farmers Party instead of voting for Labor.

COVID-19 has disrupted our society like no other recent event. It has also disrupted our politics. Our parliaments have been suspended. The cabinet process has been transformed at a national level with the significant decisions of the day being made through an entirely new institution, the National Cabinet. The implementation of social distancing measures has also disturbed many of the usual patterns of political organisation. So much of our politics is transacted through face-to-face meetings. Our caucus meetings, executive meetings, committee meetings, conferences and branch meetings have all traditionally relied on this mode of communication. We have taken this for granted and now, suddenly, this is no longer the case.

The Decline of Branch Membership

Branches serve a critical purpose as the point of entry for new members and as the primary point of engagement for ordinary Party members. But what does this experience look like? The health and viability of the Party on the ground is dependent on the effectiveness of branches in retaining and engaging members. The Party dedicates few resources to this work. It provides no regular structured training for branch officials. Most are left to languish, struggling with the myriad of tasks that are required of them to keep branches in compliance with the rules and electoral funding laws.

For most new members, the branch experience is confusing and alienating. Meeting routines are rarely explained to new members, creating a perception that the mechanics of branch meetings are archaic and pointless. What is missing is the development and education of branch officials by head-office. Party-unit officials need clarity on the purpose of the branch, and their role in fulfilling this purpose.

Branches remain a vital part of our democratic system as they enable ordinary people to have a formal interface with the machinery of government. This interface is at the heart of community connectedness. Deep roots in communities better equip parties to govern well, as they have a means of receiving feedback and embedding their values in these communities. Unfortunately, the alienating experience of ordinary members in the branch system, and therefore their declining membership, undermines this process.

Rank-and-File Participation in the Time of COVID-19

In response to the crisis, the Labor Party’s National Executive has suspended meetings of most Party units until at least 31 May. Party units have had to search for new modes of engagement. They have been jolted out of complacency about how they organise. There has been a consequential flurry of online organising that has been inspiring. It has demonstrated that adjustment can be made, that changing how we do things is possible.

The crisis has highlighted the conservatism inherent in so many institutions, including the Labor Party. What is obstructing change is not practicality but the will to change. NSW Labor’s rules currently make no provision for branch meetings to occur other than face-to-face. The Administrative committee has failed to engage with this problem, refusing to make arrangements to allow the recognition of Party meetings occurring currently in an unofficial capacity. In the absence of official sanction, many branches have stopped meeting.

What has been the impact on the social connections that maintain the Party infrastructure on the ground? Party structures are the muscle of the Party’s body politic. Without exercise, these muscles will wither, and some may never recover from this suspension of activity. Connections break, and people move on.

In some inner-city areas, the shift to online organising may have occurred seamlessly. But in the suburbs and regions, the story is different. An aging membership unfamiliar with new technology has found the transition daunting. In my branch, the time investment involved in training older members in the use of Zoom was considerable. There are still a significant number of intermittent attendees who have not made the transition to using the new technology.

The nature of the Party’s pre-selection processes mean that many branches are maintained by local leaders purely to shore up numbers for local selection contests. For these branch officials, there is no incentive to hold meetings online as the sole purpose of the branch is to maintain the local power structures. Most ordinary Party members, however, attend branch meetings for reasons beyond merely qualifying to vote in a pre-selection: they want to have a say in the direction of the Party and participate in a community of like-minded people. The essential conflict between the way branches function in the Party machine and the way members participate in them as a community space raises questions about whether branches are being used effectively as a means of engagement.

Possible Solutions to the Problems of Branch Engagement

To some, the current crisis presents an opportunity to undermine the rank and file pre-selection system. Some have argued for the removal of the activity test: that is, the requirement for pre-selectors to attend a minimum number of meetings to qualify for a vote. While, certainly, the attendance requirement for pre-selection does pose an obstacle to branches meeting online, removing the main incentive in the Party machinery for maintaining branches would be a grave mistake. This would lead to a collapse in branch numbers, leaving the Labor Party rootless and disconnected from the communities that it seeks to represent.

Some are promoting a system of engagement that breaks with geography and organises members thematically, through issues and identity-based groups. The Labor Environment Action Network (LEAN) and Rainbow Labor are two examples of the basis for a possible new model. These groups have a useful place in the Party’s membership structure and play an important role in advocating for policy change within the Party, but they cannot be the primary means of organising members. The problem with the thematic approach is the impact that it will have on an already degraded geographic branch structure. Activist time is subject to opportunity cost; party members have a limit on the time they have available to dedicate to party activity. Time spent attending meetings of issue or identity-based groups is time that is unavailable to commit to maintaining geographic branches. This matters because geography shapes the organisation of our politics. Communities are represented by geographically based electorates. To be viable in this system, you need a connection to place.

Instead, the COVID-19 crisis should be an opportunity to look at the barriers to participation that are latent in the existing branch structure. If we accept Hugosson’s thesis, the Labor Party has a significant problem. Membership decline and the decline in our primary vote are two sides of the same coin. To reverse this trend, we must first recognise it as a problem.

For example, there is a particular problem with a lack of women’s involvement in the Party. Women are less than a third of the total membership, and the attendance of women at branch meetings is lower still. Part of the problem may be the obstacles faced by women in paid employment and those with young children. They are often time-poor and have considerable caring commitments on weekday evenings when most branches meet. Online organising might contribute to remedying this problem. If we are to experiment with new modes of organising, I suggest the best place to start would be to shift the Party’s intermediate structures, like electorate councils and policy committees, entirely online. This would allow for increased rank-and-file participation in these spaces without undermining the value of in-person branch meetings.

Unfortunately, to-date the leadership of the Party has not been interested in tackling the decline in branches and membership participation. As a consequence, the dimensions of the problem remain unknown. If you don’t ask questions, you tend not to get uncomfortable answers. There is a shortage of information about what is going on in branches. No data is collected centrally by the Party Office, and as a result, no analysis occurs. We don’t know how to improve participation in branches because we don’t know who currently does and does not participate, or why. Without a systematic assessment of branch activity, the Party risks allowing a critical electoral asset to degrade to the point where it cannot be resuscitated.

The Party should be providing training and support to branch officials to learn how to do their job more effectively. Party organisers should be required to focus their work on the areas where the Party is weakest and their performance measured against benchmarks for branch and membership growth in the targeted areas.

Strong parties win elections. Strong parties bounce back from defeats quickly, and strong parties can defend the gains made in government from opposition. The true measure of the strength of a party is the depth of its enduring support in the community. This is despite the vicissitudes of the electoral cycle. If Labor is to avoid the Pasokification fate of many of its european sister parties it must urgently address its membership participation problem.