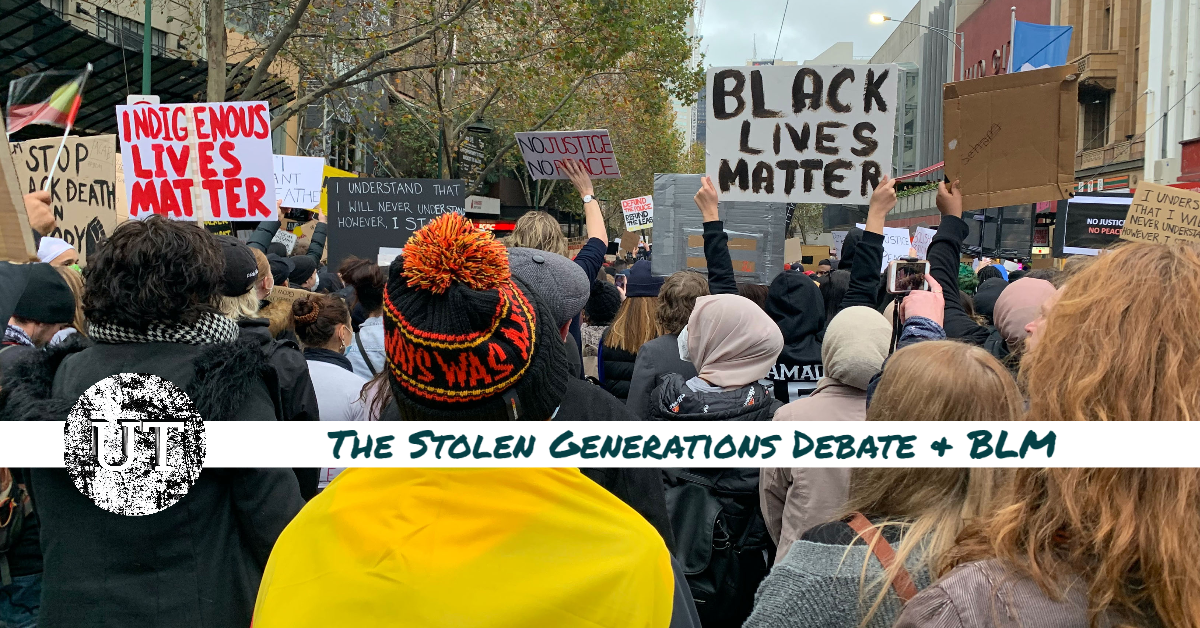 In 1915 the New South Wales Parliament passed a series of amendments to the Aborigines Protection Act. The amendments  granted disturbing new powers to the Aborigines Protection Board, most notably the authority to remove Aboriginal children from their families without parental consent or court orders. This movement towards ‘assimilation’ ultimately led to the removal of thousands of Aboriginal children from their families. We remember the children affected by these horrific practices as The Stolen Generation.

Australians typically understand this period of ‘Indigenous Affairs’ as a shameful blight on our nation’s history. Our notionally enlightened multicultural present locates the practice of child removals in the distant past. This perspective neglects the fact that the number of Indigenous children in care doubled in the ten years following Rudd’s apology. Further, Aboriginal kids now make up 40 percent of children in out-of-home care in NSW. While the contemporary practice of child removals might be cloaked in more acceptable technocratic language, its systemic roots are unchanged. Similar observations can be made in relation to  Aboriginal incarceration rates, deaths in custody, and poverty.

Sadly, a sizable portion of the Australian community believes that systemic racism against First Nations has been largely rectified by the 1967 referendum, the Mabo decision, Kevin Rudd’s apology and better representation for Aboriginal Leaders in public life. To these people, the demands of David Dungay Junior’s family and the Australian Black Lives Matter movement generally, may seem bizarre, misplaced or even aggressive.

Undoubtedly many of the people who are critical of the Black Lives Matter movement in Australia are motivated by bigotry. However, there are also people who are simply reproducing an interpretation of contemporary Aboriginal Australia which dominates our education system and mainstream politics. This liberal reformist perspective understands systemic racism as a political relic, allowing politicians, media pundits and the business community to make the case that ‘closing the gap’ is simply a matter of catching up for lost time.  If this is how we understand the problem then the solution will not constitute a reshaping of the institutional balance of power between First Nations and the rest of civil society. Instead the liberal reformist proposes spending extra money here and there and increasing Aboriginal ‘representation’ within the existing system. The radical structural demands of Black Lives Matter protestors appear, therefore, to be ‘extreme’ or ‘going too far’.

To persuade ordinary people of  the reasonableness and urgency of the Black Lives Matter movement’s demands, we need to demonstrate that systemic racism against Aboriginal people is an ongoing and necessary feature of an economic system organised to maximise profit for a small group of wealthy people. This is by no means a modern concept, the NSW Legislative Assembly’s Hansard record clearly shows that a handful of regional Labor MPs were acutely aware of the systemic economic processes underlying the Aborigines Protection Amendment Act and the child removals it instigated. While only three MPs ultimately voted against the bill, the arguments made by the Member for Murrumbidgee, Patrick McGarry, offer a telling insight into the reality of colonial violence and its basis in economic exploitation. As McGarry explains:

“It is the mean settler who wants to get absolute control over these children to make them work for him. He is assisted by the mean policeman, who depends for promotion on the mean settler and the mean squatter. They make use of the policeman and every other official who are dependent on their favour, in order to get control of the children...That means the opinion of an official, perhaps some policeman who may be in league with the squatter of the district who wants to get absolute control of a child and use him as a slave without paying him wages...This bill means that practically every aboriginal child will be taken away from its mother in cases where a squatter wants a child or where an official wants a child to be separated from the mother.”

While the comments made by Mcgarry and his colleagues were by no means perfect (even by the standards of the time) they showed a keen insight into the realities of the Aborigines Protection (Amending) Act 1915. At several points the Hansard records Mcgarry interjecting to point out the reality of the legislation as an instrument designed to “To steal the child away from the parents”. Mcgarry’s comments are undoubtedly shaped by his experience in the Irish Land League and as a miner and farmhand in regional Australia. Despite the flaws in McGarry’s arguments and language it would be difficult to argue that a contemporary progressive politician would make such bold statements and ultimately cross the floor to vote against their own government. He goes onto remark:

“These people are unfortunate because, in the interests of so-called civilisation, we have over-run their country and taken away their domain. We now propose to perpetrate further acts of cruelty upon them by separating the children from the parents"

The continuity between Mcgarry’s observations and the systemic processes highlighted by Aboriginal Leaders and the BLM movement in our own time demonstrate that attempts to rectify the imbalance between Aboriginal and non-Aboriginal Australians without significant structural reforms have largely failed. Of course, struggles led by First Nations to create a system of land-rights and political representation through ATSIC and other institutions have had a profoundly positive impact but in the absence of fundamental reforms many of these gains have been eroded or abolished by successive Governments. The Howard Government abolished ATSIC in 2006, wound back Native Title claims and ultimately forced through a series of highly invasive reforms as part of The Northern Territory Intervention. Sadly the majority of these reforms were renewed by the Gillard Government as part of the ‘Stronger Futures’ program, which remains in force.

To challenge racism in this country it is necessary to support reforms which don’t just shift the tone of discussion and the ideas of individuals, it is also necessary to campaign for reforms which fundamentally alter the balance of power. This is intrinsic to Aboriginal Self Determination. Reforming the Police and prison system to hold employees accountable for the deaths of Aboriginal People in custody, supporting a system of treaties, the Uluru Statement and progressive welfare reforms are all part of this legislative puzzle. These structural reforms and the demands emerging from BLMs grassroots requires us to accept that systemic racism is not a thing of the past and that no amount of representation within a system which is fundamentally unfair and hostile to First Nations will deliver the racial justice so desperately needed in this country.