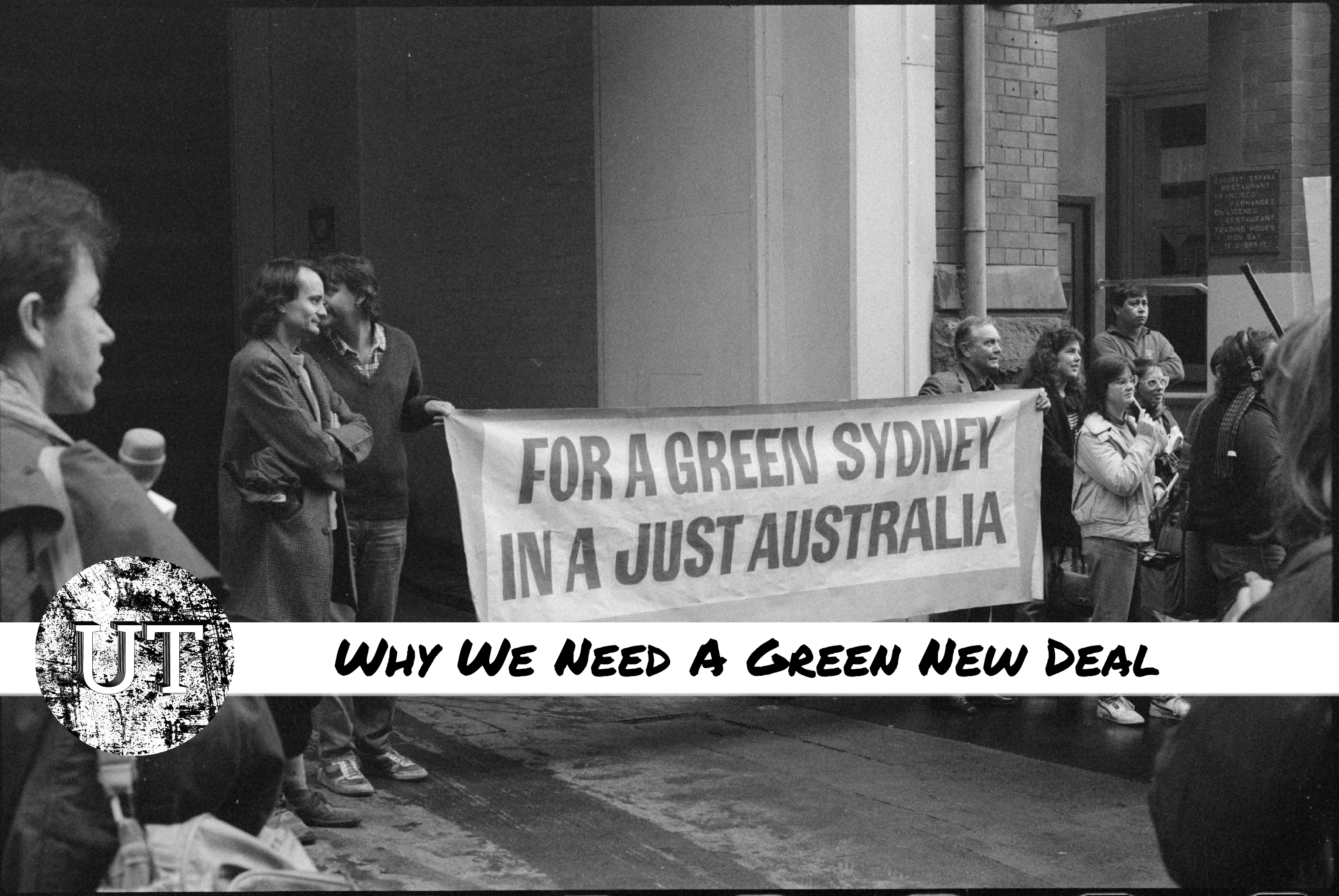 By Nick Daniel and Charlotte Brady

Coronavirus may be killing the economy but it has been on life support for a very long time.  Every indicator tells us we are about to enter the worst economic downturn since the Great Depression. The immediate cause will be the pandemic, but we should not ignore the fact that this is a new phase of a crisis with a far deeper heritage. The need to organise towards a fairer and greener future, towards a Green New Deal, has never been more urgent.

Since at least the Global Financial Crisis in 2008, Australian capitalism has proven itself incapable of doing the things we expect of it. Household income has been stagnant. Entering the job and property market has become more and more difficult. Underemployment and precarity have become the norm. It is clear that whilst we are entering into an unprecedented stage, the crisis of economic inequality is an ongoing one. We should say this as clearly as possible: the coming economic downturn is being accelerated by the global pandemic, but it is the function of a system in perpetual crisis.

It follows that we should not consider the state interventionist response by the Coalition government a victory. This response will simply function to prop up a flagging economy, performing a role carved out by the global financial system for the state in times of crises. These measures are not designed to protect working people or lay the groundwork for transformative social change. It is a blatant attempt to maintain the status quo by whatever means necessary.

This is evident in the fine print. Eligibility for the JobKeeper payment turns on an employers’ lost profits, and arbitrarily delineates between workers based on the nature and length of their employment. The moratorium on evictions has not been accompanied by an amnesty on rent. These reforms are the product of sluggish, corrective tussles between the government and the capitalist class as to who should take responsibility for the fallout of this crisis. They will inevitably create tension between workers who have benefitted and those who have fallen through the cracks. This is the divide and conquer strategy of a reactionary government willing to do just about anything to resist real systemic change.

This strategy provides us with a blueprint for how the Coalition will respond to the coming climate crisis. Instead of providing a program which improves the lot of all working people, the Coalition will look to entrench existing divisions and create new ones where necessary.  In response we need a bold vision of a different kind of future built on solidarity, not division. This is the possibility that lies nascent in a radical Green New Deal. The need to organise towards this end has never been more urgent.

Rank and file members can start doing this now. We can begin by building alliances with those who share our fundamental goals in the broader struggle, both inside and outside the Party. To play its role in this fight the Labor Party leadership needs to go beyond its current policy vision regarding climate change. We need more than an inadequate target without a clear plan of how to get there. We need to articulate a vision of the future that is both fairer and greener which we can organise around. We need a Green New Deal that fundamentally reshapes our relationship with work and the environment. That is based on solidarity between groups who will be worst affected by crises. That rebuilds the world in a fairer way, whilst saving the planet.

For a Green New Deal

A Green New Deal therefore means more than just transitioning away from the use of coal, it means a transformative socio-economic program. The exact nature of such a program will be a matter of ongoing discussion, and must be the function of authentic consultation with civil society. However, we can begin to outline the principles on which a Green New Deal must be developed if it is to be one in accordance with solidarity and fairness. We propose the following as the prerequisites of such a program:

Decarbonisation – to stand a real chance of avoiding catastrophic warming, building a low carbon economy must be the primary political focus of the next decade. This will involve a rapid transition to renewables but it will be more than an energy policy. A Green New Deal also means changing the ways we are housed so we are more energy efficient and occupy less space; transforming our transport infrastructure so fewer people have to drive to work, or to see their loved ones; rethinking our relationship with work to decouple it from the need for perpetual growth; and fundamentally changing the way we live and interact as a community.

Decolonisation – a Green New Deal must centre on our responsibility to decolonize. It must hand Aboriginal and Torres Strait Islander communities the leading role in the transition out of our extractivist colonial economy, and begin substantive repair of two centuries of dispossession. It must also realise our obligation as a wealthy nation to reparate nations of the Global South, both least responsible for, and most vulnerable to, the ensuing climate crisis.

A just transition – we must have a concrete plan to transition workers in coal communities into meaningful and well paying work in a new green economy. This would require empowering unions and workers through changes to industrial relations laws, including the right to strike. The pillars of this new economy must include the massive green infrastructure projects necessary to decarbonise, regeneration of our degraded landscapes and the rejuvenation of our public healthcare and education system.

Public and democratic ownership of Industry – transition to this new economy will not be built on incremental market mechanisms. A Green New Deal must return energy, agriculture, housing, transport, health and education sectors to public hands. These sectors must pass into localised control, so that green industrial policy is labour-led, and no one is priced out of the means to live.

These themes must be the pillars of a response to the climate crisis built upon solidarity. They function to ensure that our program addresses the twin crises of our era - inequality and climate change - allowing us to organise against the system that created those crises.

A Bridge to Where?

Only if we pursue a Green New Deal with conviction can the Labor Party offer an authentic alternative to the deeply unfair status quo. The Prime Minister is fond of telling us that we need a bridge to the other side of this crisis. The Coalition’s current response tells us much about what this ‘other side’ will look like. The other side is the police state; it is the soft-authoritarianism of division; it is a punitive welfare system;  it is inequality; precarity; crisis; stagnation. It is all those things we have come to associate with this late stage of capitalism and more. It is the same unequal society, charging towards a climate disaster from which it may never recover.

The moral imperative to ensure that this does not come to pass has never been greater. The Labor Party cannot afford to be passive in a moment like this. It needs to distinguish itself from the reactionary policies of the Coalition and articulate to the working people of this country what a better future might look like. The Party must begin to build, in the words of Tom Uren, ‘an environmentally sensitive, beautiful and more tolerant world’. To provide light where there seems to be nothing but darkness.