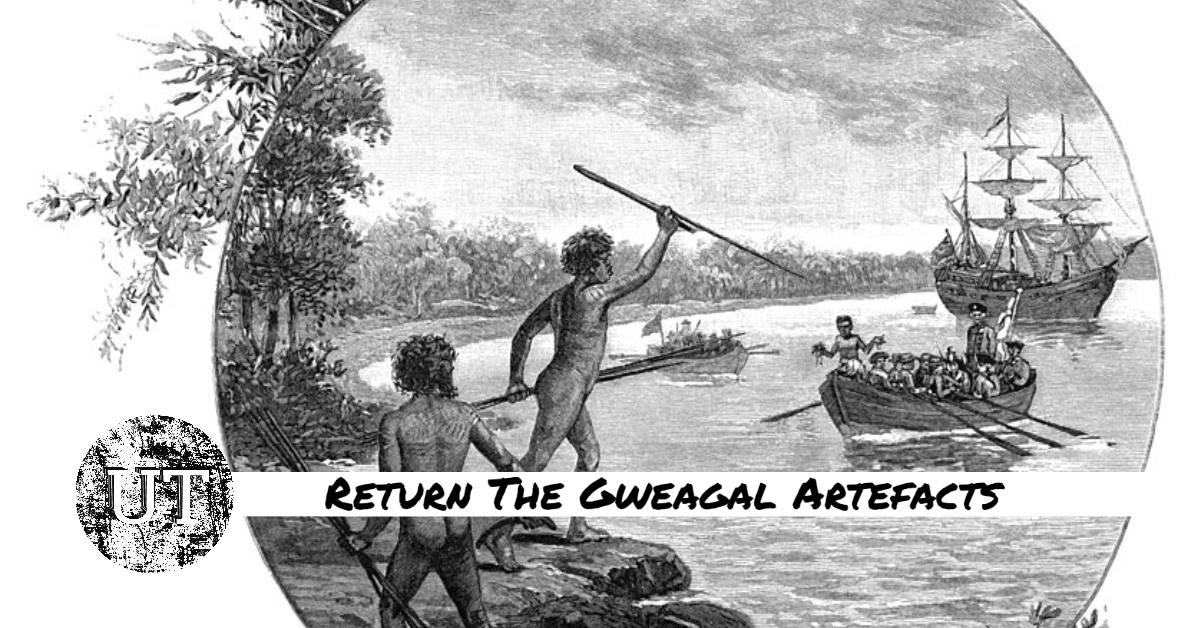 250 years ago several artefacts, including a shield and 40-50 spears, were stolen from the Gweagal People of Botany Bay. They now sit in museums scattered across the globe.

Rodney “Murrum” Kelly, Gweagal Warrior, writes on the campaign to bring them home.

It was 29th April 1770: the day of First contact between the Gweagal People of Botany Bay and British People.

It is a day in history every Australian should know. For many, it's a day of great discovery as the first British person to step foot on the east coast of Australia. But for the original people of this land, it was a day that ended in a man being shot and the theft of items from the Gweagal People.

This history is right in front of us. In the journals of those who were there that day, and in the oral history passed down from generation to generation. But most importantly in the shield and the spears that were taken on that day. In 2020, 250 years since those shocking events, we have an opportunity to bring the surviving shield and spears to the forefront of history telling. A shield, owned by the British Museum and on display in the enlightenment room, as well as four spears owned by Trinity College, and one spear owned by the ethnographical museum in Sweden are what we know exists today - they are the Gweagal Artefacts.

Three spears from Trinity College are in this country, on loan in the National Museum of Australia. Like many people, not only here in Australia, but also the UK, we think the Gweagal Artefacts should be returned to the Gweagal People and put on display so we can all learn the true history of 1770, and about the amazing culture of the original people of this land. A shield and spears so rich in culture and history everyone should know what they are.

Museums and repatriation is now a topic many people talk about, but getting museums to repatriate wrongfully taken items has many difficulties. Some are government introduced, like the British Museum Act 1963, which forbids the Museum from disposing of their holdings. Further, we have our own Act of Parliament,the Protection of Cultural Objects on Loan Act 2013, which limits the circumstances under which one can claim cultural objects on loan through legal proceedings or the seizing of cultural objects while here in Australia.

If it is now time for truth telling, and now time to once again try to close the gap. Let's begin by looking at the Gweagal Artefacts and how they were taken. Let us make sure they are returned home and to the Gweagal people, and we can all start to understand history from a different perspective.

It is time for our Government to do the right thing and bring them home.

Return The Gweagal Artefacts campaign was officially started in March 2016 by Rodney Kelly, Gweagal descendant, when the artefacts were here on loan in Canberra. Since then there hav been several trips to the UK which included many lectures with university studenst and teachers and also two stolen goods tours of the British museum. The campaign has also led Rodney to Germany, Sweden and the Netherlands. Today there are six known Gweagal Artefacts that survived first contact in 1770 at kamay Botany Bay four owned by Trinity College Cambridge, a shield owned by the British Museum, and one spear owned by the ethnographic museum Stockholm Sweden