Huge Win: Online Branch Meetings to be Recognised in NSW! 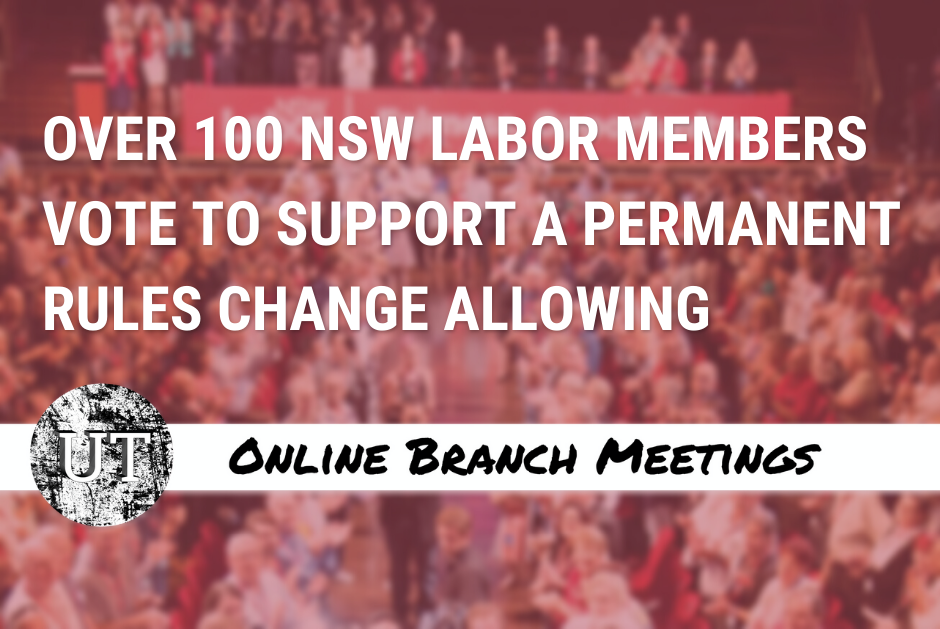 By Chris Haviland and Shannen Potter

The Administrative Committee is expected to adopt a recommendation for both fully online and hybrid meetings to be recognised by the Party at its upcoming meeting on 5th February. This is a huge win for the campaign for online democracy.

Over 140 rank-and-file members who are a part of the campaign came together on 28th January on a statewide Zoom meeting to discuss this exciting development. The campaign thus far has been a highly successful effort in grassroots organising in the ALP, as hundreds of members from across NSW have signed petitions, sent letters to the General Secretary, spoken to comrades and attended a mass-member meeting in November 2020. Our efforts have led to the formation of an Organising, Recruitment and Training Sub-Committee to consider issues of online participation and ultimately to the recognition of online branch meetings.

This is a massive win for increasing participation in our Party, not only in the COVID-19 pandemic, but also for those who are excluded from traditional modes of attendance at branch meetings through things like caring responsibilities, disabilities, distance in regional areas, and shift work. This represents a major breakthrough for our campaign and our pursuit of greater Party democracy.

To join the campaign for party democracy as part of a local group of like minded people please register here and a campaign organiser will get in touch.

The Admin Committee is also expected to set guidelines for 2021 AGMs. These rules will allow AGMs to be held online (with in-person arrangements made for ballots if required) and base eligibility to vote or stand for election on that for 2020 AGMs, provided a member is financial and lives in the branch area.

In light of these developments, the following motion was put to the meeting by Madeleine Davis of Katoomba Branch and Rozelle-Lilyfield Branch Secretary Anne Kricker and passed by a massive margin, with 98% of members voting in favour.

“We welcome the support for the recognition of fully online Party Unit meetings by the Organising, Recruitment and Training Sub-Committee. We congratulate the Party Officers for their support of these reforms.

We acknowledge that this reform:

1) Has come about because of the sustained campaigning of rank and file Party members prepared to support sensible changes; and

2) Will help increase the participation of Party members and make the Labor Party more democratic.

We call on the Administrative Committee to vote in favour of these changes at its next meeting on the 5 February.

We commit to continue campaigning until these changes are permanently entrenched in the Party’s Rules. To this end, we resolve to hold a further rank and file assembly before the State Annual Conference to hear a report on the progress towards this goal.”

Members also discussed ways that we can continue our campaign for increased democracy and participation in the ALP. There was widespread support among the meeting for holding NSW Policy Committee meetings more frequently, online, and open to observation by all members. Similarly, there was support for reform of pre-selection rules to set clear requirements for voting eligibility due to the disruption to branch meetings caused by COVID-19, and to increase the transparency and accessibility of the pre-selection system.

We will continue to fight for increased democracy in our Party, and will be focussing on these issues in the coming months. To join your local breakout group to continue fighting for online meetings and Party democracy alongside branch members in your local area, click here