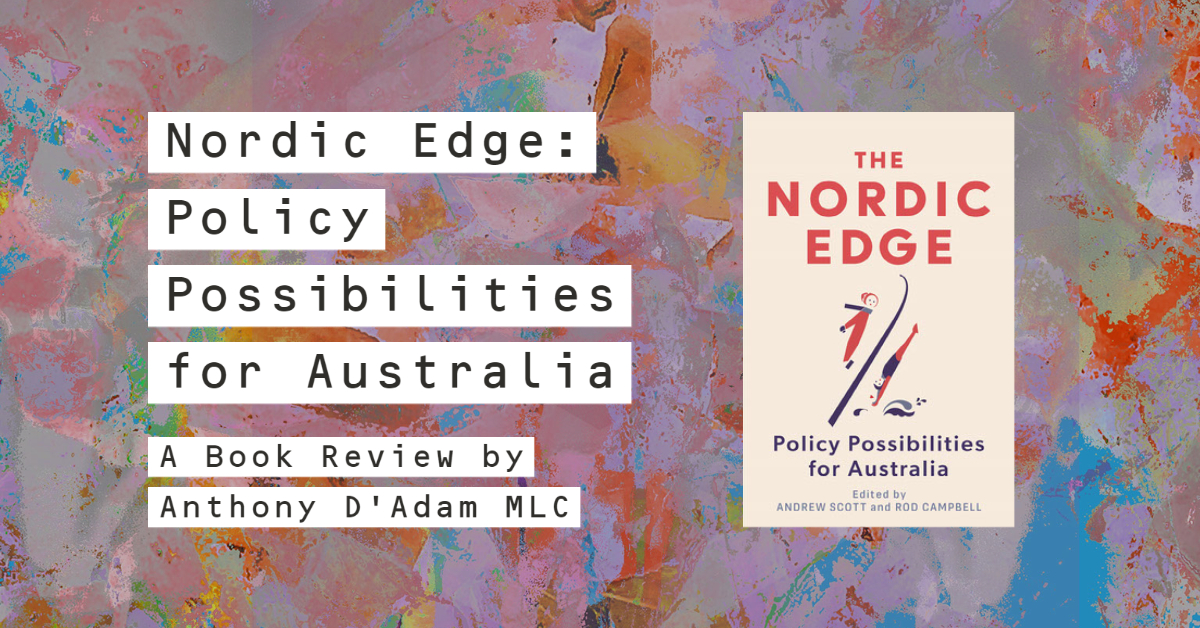 Nordic Edge is a fascinating tour of the political possibilities that await Australia if we are prepared to look further afield for inspiration.

Labor Member of the Legislative Council, Anthony D'Adam, on what Australia can learn from the success of Nordic social democracy. This investigation yields a refreshing alternative to the neoliberal policies which have come to define Australia, The United Kingdom, and The Unites States. Scandinavian Parliaments have shown that it is possible to build ecologically and socially conscious societies without sacrificing economic prosperity.

Proponents of the Anglo Saxon Neoliberal model have a lot to fear from a wider appreciation of the achievements of social democratic governments in Scandinavia. As the opening chapter of the Nordic Edge demonstrates the high tax and high public spending Nordic Governments outperform most of the OECD on multiple metrics. The Nordic Model delivers, longer, happier, and more prosperous lives to its citizens. These societies show that there is a viable alternative to the politics of austerity which have atomised countries like Australia.

Australians are habituated into looking to the UK and the USA for policy inspiration. What the Australia Institute has set out to do through its Nordic Policy Centre (NPC) is to encourage policymakers to broaden their horizons and take inspiration from the many practical examples of progressive policy innovation that have been put into action in the Nordic sphere. Their research demonstrates that there is no inherent trade-off between social security and economic prosperity.

"The Nordic Edge: Policy Possibilities for Australia” is the first substantive contribution to the NPC’s endeavour. The text covers a variety of policy experiments including Norway’s Sovereign Wealth Fund, Sweden’s explicitly feminist foreign policy, the use of gendered budgeting, the role of centralised industry bargaining in supporting greater gender equality, the role of the Scandinavian governments in leading global efforts around addressing climate change, Norway’s advanced position on electric cars, the use of government subsidies in Sweden to support media diversity, and the profoundly different approaches taken in Sweden and Norway to prisoner rehabilitation. The text’s editor’s, NPC Convenor Professor Andrew Scott, and the Australia Institute’s Research Director Rod Campbell make a compelling case for similar measures in Australia.

The text contextualises Nordic policy in relation to similar issues in the Australian political system. As I made my way through each case study I repeatedly asked myself why Australia has failed to implement a Nordic model despite its obvious benefits. The conclusion I reached was that Australia’s political culture reinforces the inertia of neoliberal policy-making. This culture is combative rather than cooperative, with a ‘winner takes all’ approach. Our system is grounded in a binary between government and opposition that assumes the periodic alternation of roles. This is not how governments work in Scandinavia - parliaments elected by proportional representation encourage coalition making which rewards those that can find policy common ground. This system creates a level of continuity and certainty around areas of public policy that are not vulnerable to changes in government.

We can see how similar changes have affected New Zealand since its Parliament adopted the Mixed Member Proportional (MMP) system in 1996. Despite alternating administrations in the New Zealand political system you no longer see the brutal changes of policy that occurred under successive Labour and National governments in the eighties and nineties. Politics in New Zealand is more civil and consensus-based. Key policy areas are now embedded in the New Zealand political system, notably the Nation’s progressive foreign policies and proactive approach to reconciliation with Maori Communities.

Nordic Edge is a fascinating tour of the political possibilities that await Australia if we are prepared to look further afield for inspiration.

You can watch a video of a policy forum I co-hosted with Auburn Labor to discuss Nordic Edge Below. The event featured Chris Bowen MP and the text's author, Professor Andrew Scott as panellists.