The Young Labor Campaign for A Green New Deal 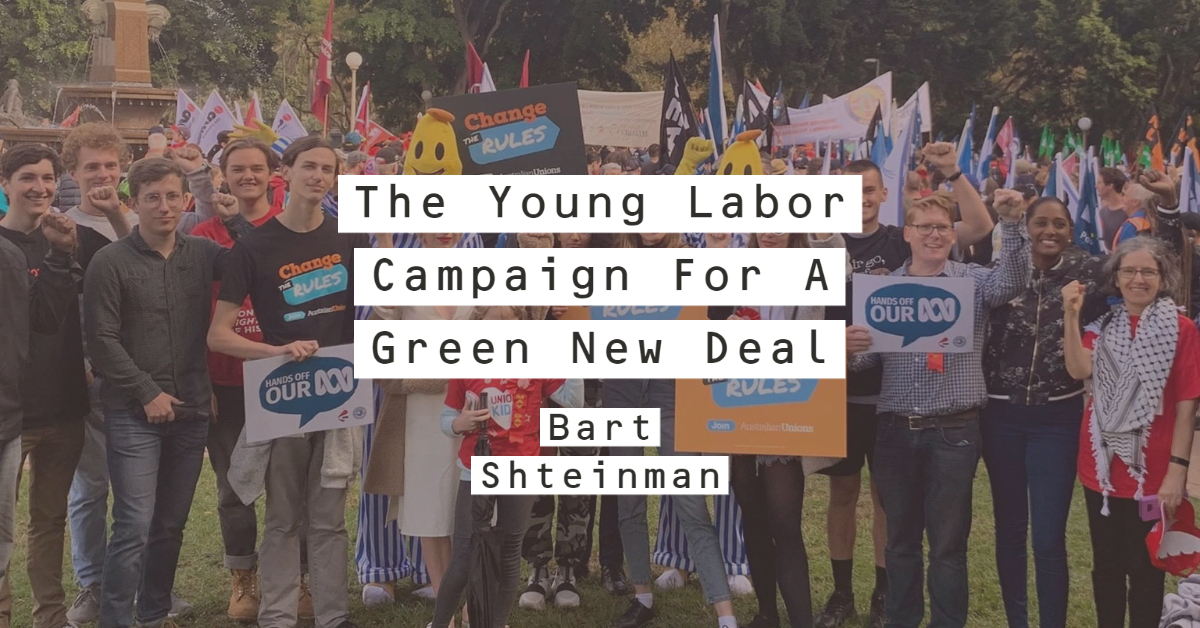 Young Labor Activists are leading a rank-and-file campaign for climate justice from the party's youth wing.

A Green New Deal will not only address a gaping policy hole in NSW Labor, it will foster a new generation of people that will continue to drive the ideals of transformative governance. Young Labor members have already travelled to frontline communities to hear about their struggle against new coal and gas projects. These young party activists have since produced a documentary and rank-and-file campaign.

Over the last few years, Young Labor Left (YLL) and other Labor activists have been organising  across regional NSW, listening to farmers,

Indigenous activists and local Labor members. A campaign of this nature is always going to be  controversial in the party. We hope to show what  we heard from communities and the policies that have been developed in conjunction and agreed  upon by rank and file members.

Our campaign has been necessary because the ALP’s messaging on climate change isn’t  working. Campaigning in the Upper Hunter  by-election demonstrated to us and to many  local Labor activists we spoke to that we can’t  win back voters telling them we’re somehow  pro-renewables without being anti-fossil fuel.  Ordinary people see through this double-speak.

The ALP is failing to confront the growing  anxiety by workers and their communities when  coal stations and mines are being forced to close  by the global shift to renewables. As a party,  we’re fooling ourselves if we think we can just  champion climate change and avoid the topic  of what happens to coal communities because  we think it’s electoral poison. The real poison is  leaving them out of our policies and telling them  it’s ‘up to market forces’ to decide the future of  their jobs.

And the truth is that right now the region we  have been visiting aren’t transitioning away  from fossil fuels, they’re transitioning towards  them. The Hunter Valley has increased its coal  production by a quarter in 10 years. Through  fracking for CSG, Australia has quintupled its  liquified natural gas (LNG) exports to become the  largest shipper of fossil methane in the world.  This expansion of extraction is directly hurting  the very communities held up by the media as  the defenders of fossil fuels. Despite this, these  communities have been disenfranchised. Their  concerns are repeatedly railroaded.

Yet there is reason to take hope. Around the  world, the movement for a Green New Deal is  uniting workers, environmentalists and First  Nations people around a message that we can  tackle the climate crisis head on through by  working together. We have connected with many  different activists in the movements that have  been supportive of our work in the party and in  the wider communities.

Motions in local branches were passed in twenty  branches and electorate councils calling for  worker-led climate action and a moratorium  on fracking. A position that was also endorsed  by a meeting of over 90 rank-and-file ALP  members. We have also helped renew the hopes  of countless young people agonising over the  climate crisis that their aspirations have a place  in the Labor party and give voice and lead to a  truly transformative democratic process in our  communities.

A Green New Deal will not only address a  gaping hold in policy but will also foster a new  generation of people that will continue to be  driving the ideals of transformative governance.  We will continue to campaign for a Green New  Deal because we think that it is important for our  party and the communities that we hope to serve.