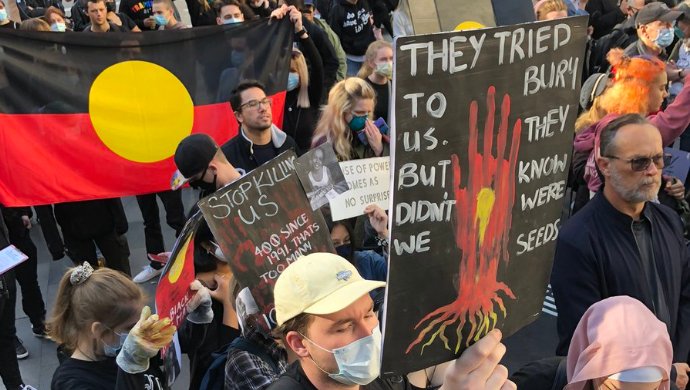 The NSW Liberal’s response to Black Lives Matter shows that for Gladys all gatherings are equal but some gatherings are more equal than others, writes Cian Galea.

Last Friday, the day before the planned protest against black deaths in custody and the death of George Floyd in the US, Premier Gladys Berejiklian reversed her position that the demonstration should go ahead in a COVID-safe way, and directed NSW Police to make an application to the Supreme Court to have the protest declared unlawful. She did so following the application of pressure by members of her Cabinet, including Treasurer Dominic Perrottet and Police Minister David Elliott, so-called free speech warriors like 2GB’s Ben Fordham and the leader of the NSW Labor Opposition, Jodi McKay, to have the vigil prohibited.

Each of these figures presented at least one of the three following arguments. The first was  that allowing the protest to go ahead would expose the attendees to an unacceptable risk of new cases of COVID-19. The second was that none of the COVID-19 safety measures proposed by the organisers to reduce those risks would be sufficient. The third and final argument was that it was disrespectful to the sacrifices made by Australians in relation to not marching on Anzac Day or attending the funerals and weddings of their loved ones to permit the protest to go ahead.

Whatever you think of those arguments, the simple fact is that not one of them was raised in relation to the five-hundred person protest against vaccinations, 5G telecommunications networks and fluoride that had taken place the week before on 31 May 2020. In spite of the fact that no public gatherings were lawful until the following day on 1 June and there were more live cases in the community at that time, no attempt was made by the NSW Government to have that demonstration prohibited. No reference was made by Fordham to the unfairness of having mass protests while Australians couldn’t lawfully congregate to mourn at funerals or celebrate at weddings. And most tellingly, in its aftermath no attempt was signalled to ban protests to prevent the spread of COVID-19.

Conversely, in response to the demonstration last Saturday, David Elliott has signalled the introduction of changes to give NSW Police the power to make all protests that breach the safety restrictions illegal without having to undergo the public scrutiny of fighting a protest in court. It has been indicated that these powers will be granted for the duration of the global pandemic, a period of time that is functionally indefinite considering how entrenched COVID-19 is globally.

It goes without saying that if those amendments are made, NSW Police will be unlikely to authorise any protest of this fundamental erosion of our civil and political rights. Certainly, after police attempts to suppress the Black Lives Matter protest failed altogether, the police brutality towards peaceful protestors at Saturday’s rally would not instill anyone with confidence that NSW Police are the appropriate gatekeepers of our right to protest.

The Police Commissioner Mick Fuller’s decision to seek the prohibition of the Refugee Action Coalition’s rally against immigration detention has betrayed the Liberal Government’s intention in this regard. Regardless of whether they can increase police powers to stop protests, the Liberals will continue to attempt to use the Supreme Court to ban mass assemblies of people who are critical of them. As was the case with their attempt to have the protest last Saturday declared illegal, the sole effect of the Supreme Court ruling in the police’s favour will be to authorise the use of police violence against the protesters who have already committed to attending.

The idea that the Black Lives Matter or Refugee Action Coalition protests present a risk of infection unmatched by any other gathering in New South Wales would be laughable if it wasn’t being utilised to restrain our freedom of speech. Thousands of schoolchildren, teachers, and essential workers have been crowding into classrooms, attending work, and using public transport. Shopping centres and markets have been welcoming many visitors every day. In fact, images emerged in the wake of the protests of a market held in North Sydney with a great number of customers crammed into the tiny spaces between the stalls, not practicing social distancing.

All of these gatherings are equal, but some of them are more equal than others. For the NSW government, protests in support of right-wing conspiracy theories and markets in the wealthiest areas of the city are good reasons to allow people to gather in numbers greater than those allowed by the current COVID-19 restrictions. It is clear that protests against Aboriginal deaths in custody, against the inhumane treatment of refugees, and functionally, any mass assemblies critical of the government, are not.

That’s why I’ll be going to Town Hall this Saturday at 2pm regardless of what decision is made by the Supreme Court about the legality of the Refugee Action Coalition’s protest, just as I would have attended the protest last Saturday regardless of its ruling on that rally. Facism is on the march when any of our government’s actions can aptly be described as Orwellian. We cannot rely on the judiciary to save us from the violence of the police state of which that institution is a part. We must act to prevent black deaths in custody and close immigration detention now, and we must not allow this government to intimidate us out of expressing those opinions because they don’t want to hear them.