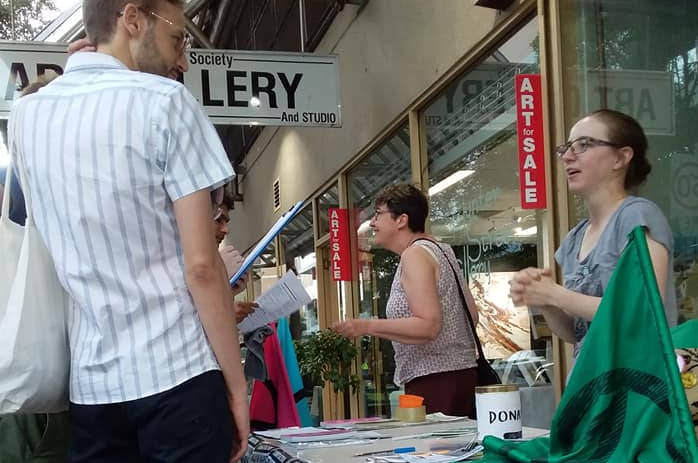 In late 2019 the Extinction Rebellion started organising in Western Syndey as part of their Spring Rebellion. Angelica Kross reflects on her experiences as an activist within that movement and the unique challenges presented by Sydney's west.

I was part of the expansion of Extinction Rebellion into western Sydney after the Spring Rebellion in September 2019 was launched. Very soon after that, there were the massive climate protests with groups like School Strike for Climate and Uni Students for Climate Justice.

I joined the Spring Rebellion, and then continued to go to protests, because I was concerned that there was no action being done on climate change from our country’s political leadership. I found this to be a good reason to demonstrate. While I was present for some of the marches, I was somewhat concerned that it seemed to me that those who I was meeting as activists were primarily located in the inner suburbs of Sydney. Of course, there is nothing wrong with activists being politically engaged and coming from areas like the inner west. It was a concern, however, that nothing was really happening out where I was in the western suburbs. While there are some community and political organisations in my local area in western Sydney, none focussed on the issues I am truly passionate about.

I am naturally drawn to ecological issues. This is, in part, due to a love of gardening (suppose that makes me sound like a nanna!), and the understanding of the importance of biodiversity I have developed through this hobby. I also come from an ecologically conscious family who have always been invested in the “reuse” part of the common environmentalist “reduce, reuse, recycle” mantra. Unfortunately, I have often struggled to find an outlet for these political interests in my local area beyond attendance at city protest marches.

In light of this, I want to highlight the importance of connecting with activists on the issues that matter to them, in their local area. Organising in this manner can be challenging, as I have seen in my short time in the climate movement. The high points, however, have been invigorating. They have reminded me about the fact that people do care about climate change, and have a vision for a better world. And that some of the most productive meetings can be held with cheese, wine and frozen pizza! In fact, these informal modes of organising can sometimes be the best way to connect with other activists, and develop new insights into your project.

Unfortunately, one of the biggest problems I have found in my short time as an activist are breakdowns in communication. Sometimes it can be difficult for people who are deeply invested in their beliefs to understand how place, upbringing and community can influence how someone else perceives the same issue, or takes a certain  approach to their activism. Nationally, regionally, and even within Sydney, geography can play an important role in what will be most effective to involve and engage people in your movement. This goes farther than climate activism: social movements should be cautioned to consider place in their activism.

There is a big disconnect between those living further from the CBD and those living closer to it, even among the group of people who were outraged enough to get out onto the streets for climate marches and protests. We have further to go, and there is less public transport. This environment is not native to us and, inevitably, this changes the way we organise. The conditions that function well in the confines of the inner city, notwithstanding the embedded cultural understandings of activism, are not the same in western Sydney.

Even on a local level, the issues that western Sydney faces with regards to climate change diverge from the inner city. There are less trees, especially in the newer developed suburbs. Much of western Sydney is significantly hotter during summer than the coastal areas. Higher temperatures mean the effects of climate change are having an exacerbated impact on housing, especially heating and cooling. The effects on air quality are far worse as much of our city’s manufacturing is in the greater western Sydney area. On the hottest summer days, for many people there is no respite from the extreme heat unless you consider going to the shopping centre purely for some air conditioning.

Finally, I think it is important to note that there is enormous diversity within western Sydney in terms of socioeconomic status, family and migration history, and communities. Climate activists, myself included, are still thinking and learning about the best ways to get people who are not like us involved. How do we convince someone with similar political beliefs but no experience exercising them consider activism as something not just for other people?

It bears repeating that the time-consuming, long travel distances that are required for most people in western Sydney to access environmentalist activism and organising pose a significant barrier for us to get involved. This challenge must be overcome if we are to include more people in our city’s west in our movement.

Fundamentally, climate change organising needs involved, thoughtful engagement with people that are being organised. Western Sydney is no different. I am glad to spend time with the people who have got together for climate action, and I hope we can overcome barriers to engage more people in the movement and thereby achieve better outcomes for all.