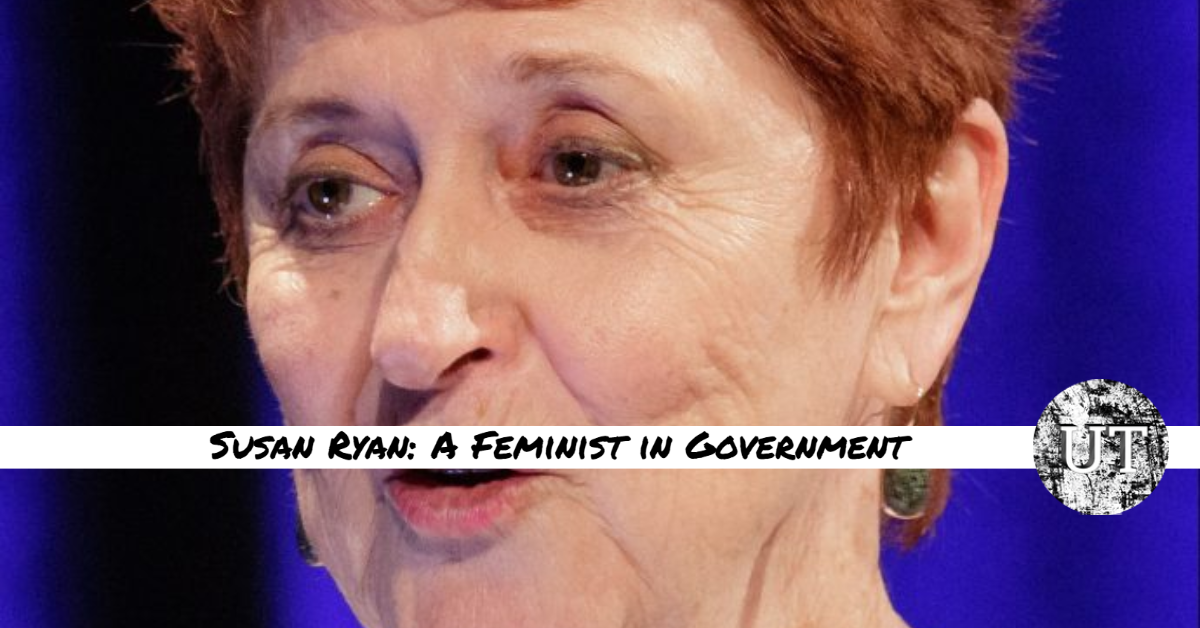 “Improvements in education, training, legal aid services, welfare services and child-care, benefit the whole of society and not just women”– a truth not yet properly recognised by policy in today’s Australia” - Susan Ryan

Susan Ryan’s generation came of age in an Australia where government, the law, workplaces and the largely patriarchal institutions of marriage and the family were increasingly in tension with women’s desire for autonomy, financial independence and a dignified and fulfilling working life. The contraceptive pill had freed women from the inevitability of childbearing, and rising prosperity and consumption were opening new possibilities for education, pleasure and self –realisation for some (but by no means most) women.

Susan joined her first women’s liberation group in Canberra in 1971. Women’s liberation was a far more complex “capital P” political movement than the recent emphasis on its astounding cultural and transformational achievements sometimes recognised. She and fellow feminists  in that pre-election year quickly grasped that Australian women needed to harness the power of government to end their virtual exclusion from political life and to initiate a raft of  practical changes to enable women to work, study, love, earn, and control their own lives equally with men.

In 1972 she became a foundation member of the Belconnen Branch of the ALP. Joining Australia’s progressive political party was one way for women to ‘master’ democratic politics and processes, policies, lobbying, pre-selections, elections, campaigns and summing up demands in snappy slogans and ‘memes.’ To this end, also in 1972, Susan and other activists in the women's liberation movement, founded the Women's Electoral Lobby (WEL), which threw a raft of feminist policies into the heady mix of the 1972 election campaign. They highlighted the need for childcare, equal pay, reproductive rights and equal access to education and training.

Drawing on the political creativity and sheer energy of Women’s Liberation, as Susan stated:

WEL utilised shock tactics, the media, persuasion, and a bit of psychological terrorism, to get issues like child care, equal pay, reproductive control, and access to education and training, on to the agenda of the newly elected Whitlam Government... That short and intense period where the Women's Electoral Lobby became an effective part of the 1972 election campaign determined my parliamentary career.

WEL’s 1972 campaign helped disrupt the parameters of Australian election campaigns.  Its contribution to the Labor victory and the policies Labor initiated in government created a new electoral phenomenon: the progressive woman voter.

Susan Ryan was elected as a Labor Senator for the ACT in 1974. During the Fraser years, Labor MPs listened and learnt from feminist union activists fighting in unions, in workplaces and in the industrial courts under the banner of the Working Women’s Charter campaign. Susan was also able to study policies and programs supporting women in Northern European and Scandinavian countries, where stable and long standing social democratic governments provided models for policies Hawke took to the 1983 election.

Susan would go on to become the first female Labor government cabinet minister in the government led by Bob Hawke. She was appointed Minister assisting the Prime Minister for the Status of Women (from 1983), as well as being Minister for Education. In the latter role her singular achievement was to double Australia’s abysmally low school retention rate over less than a decade. She saw her greatest defeat as the abandonment of Whitlam’s free university education with the introduction of university fees (the HECS scheme) in 1989, despite her unrelenting opposition within the Government and Cabinet to plans for the scheme.

It was, however, as Minister Assisting the Prime Minister on the Status of Women that Susan forged her radical and permanent legacy. She understood the increasing centrality of economic and budgetary policy and fought the battles that needed to be fought within the Cabinet and Government.

Her legislative achievements include the Sex Discrimination Act (1984) the Affirmative Action (Equal Employment Opportunity for Women) Act 1986 and the Equal Employment Opportunity (Commonwealth Authorities) Act 1987. The Sex Discrimination Act was, at the time, one of the world’s most advanced pieces of legislation supporting women’s access to and equality in work and public life. During its passage Susan and the Hawke Government were subject to relentless attacks from the conservative parties and press. Susan and Bob Hawke stood their ground, and the Act remains as one of the foundations of Australian anti – discrimination law.

In this role, Susan also organised for the preparation of a detailed Women’s Budget document in 1984. The gender lens remained an integral part of the Federal budget until the Abbott Government discontinued it in 2014. Since then feminist policy experts around Australia have undertaken the task with the leadership of the National Foundation for Australian Women. Each year since 2014, Labor has also released a gender lens following the release of the Budget.

Susan’s legacy lives on in the Labor Party. For example, we can see in Labor Leader Anthony Albanese’s 2020 Budget Speech in reply, with universal childcare once again at the top of the agenda. If she had lived a week or so longer Susan would have rejoiced as another socialist feminist demand from 1972 edges closer to realisation.