Why Economists Are Wrong About Economics 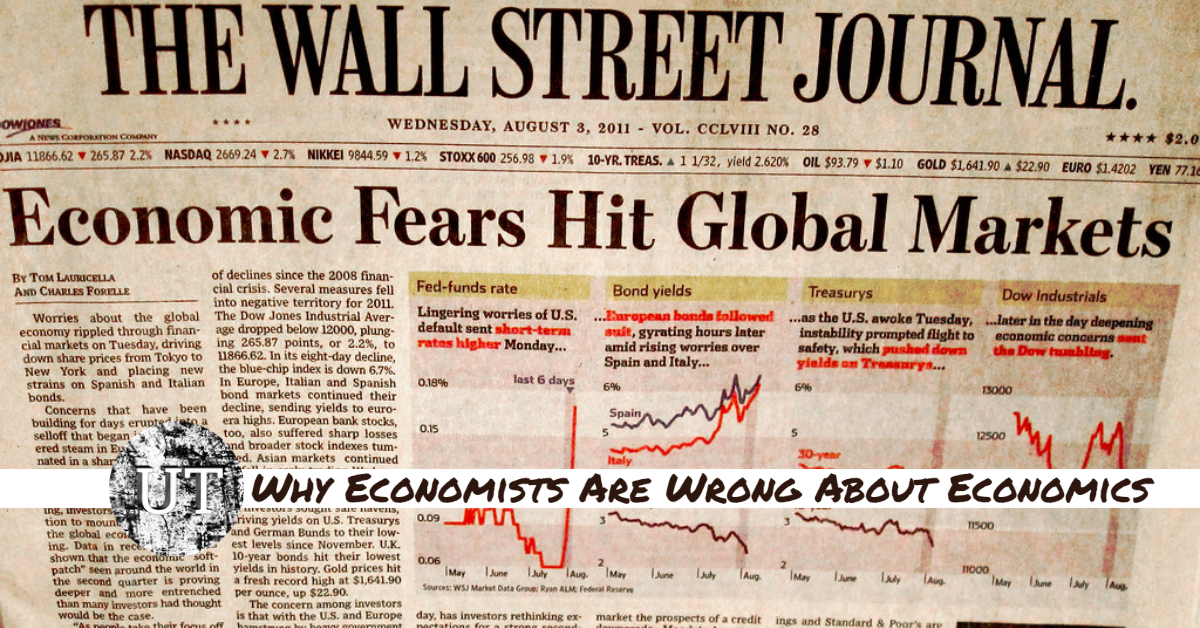 In March, after years of restraint and discipline, I suffered an embarrassing relapse. I started blogging again.

To make it worse, I wasn’t even writing about the politics of the Middle East, or journalism, where I might charitably be considered to have something approaching professional competence. Instead I was writing about economics, and what I think the mainstream gets wrong. It’s an uncomfortable position to be in as the language of “mainstream” and the “deep state”, which was once the vocabulary of the left, has now been co-opted by the red-faced, flag waving, anti-immigrant right.

We on the left want the government to listen to the experts when it comes to climate science and epidemiology. So when it comes to the economy, shouldn’t we do the same and bow out, letting the people with PHDs, nice suits and jobs at important-sounding think tanks run the show?

I don’t think so, for at least three reasons:

Economics is - in a way that hard sciences like climatology and medicine are not-  intimately connected with questions about human nature, the good life, and the just society. Are we self interested rational actors, or are our motives and choices more instinctive and socially informed than that? What fulfills us as human beings, and constitutes a life well lived? How much inequality is acceptable? How do questions of equality relate to freedom and meritocracy? What is the correct relationship between human beings and nature?

Everyone’s opinion on these things matter in a democracy. Economists very rarely study or even consider these questions in any serious way, and often are unaware of the philosophical underpinnings of their apparently technocratic work.

A related point is that discussions about economics invariably end up reflecting the specific interests of certain groups. House prices going up, which is good for those who already own a home, is reported in the media as “good news”. When they go down, which is good for those renting or looking to buy, it’s  “bad news”. It’s incumbent therefore, on us all to speak up for ourselves, and speak up for each other, and do our fallible best to understand questions of economics on our own terms.

2) Divergence in opinions is greater:

Even leaving moral and philosophical questions aside and focussing just on the nuts and bolts of how things work, debate within economics is far more raucous. The dissenting voices have far more credibility than the fringe climatologists, for example, who question the overwhelming scientific consensus regarding climate change. Consider the Bank of England which has felt compelled to publicly state that “the reality of how money is created today differs from the description found in some economics textbooks”. Germany’s central bank agrees. It’s as if NASA, rather than agreeing with the climate science consensus that the ice caps are melting, were saying “ actually, we had a look from space and the Arctic is fine”.

Hard sciences proceed in a far more orderly and progressive way. Ideas, once thrown out, rarely make a comeback.  Economics, on the other hand, is the domain of fashions, swings and roundabouts.

Listen, for example, to Professor Victoria Chick, Emeritus Professor of Economics, University College London spell out the changes in the way economists have thought about money over the last century and a bit.

In the late 19th and early 20th century, “classical” economists spoke of something they called the “pure” or “real” economy, which was a complex system of barter in which money played almost no part. Money was just what prices were set in, and so merely told you how much one kind of product or service was worth relative to others. It was like a cork bobbing in the ocean the motion of which might track currents and waves, but does not create them.

Then the Great Depression happened, and that idea was thrown out in favour of what we now call “Keynesian” economics, after  British economist John Maynard Keynes. Keynes’s work described a “money production economy”, rather than a “real exchange economy”. In Keynesian economics money - investment, wages and so on, plays an integral role in production, rather than just coming into the picture to help us swap the right amount of paperclips for the right amount of soap.

Then in the 1970s, economist Milton Friedman led a switch to something called “neoclassical” theory - using the famous thought experiment of “helicopter money”, in which helicopters randomly drop cash all over the economy, causing prices to rise until everyone is back where they started in terms of real cost, revived much of the classical model, and talk of the 'money illusion'.

Now that is being challenged by the “post-keynesians' ' who re-assert the common sense position that investment, money, banks, wages, debt and so on are key components of the economy, playing a causal role.

3) Predictions from the mainstream don’t match the data.

Consider this graph from the CSIRO, comparing its predictions for temperature changes with real world data: 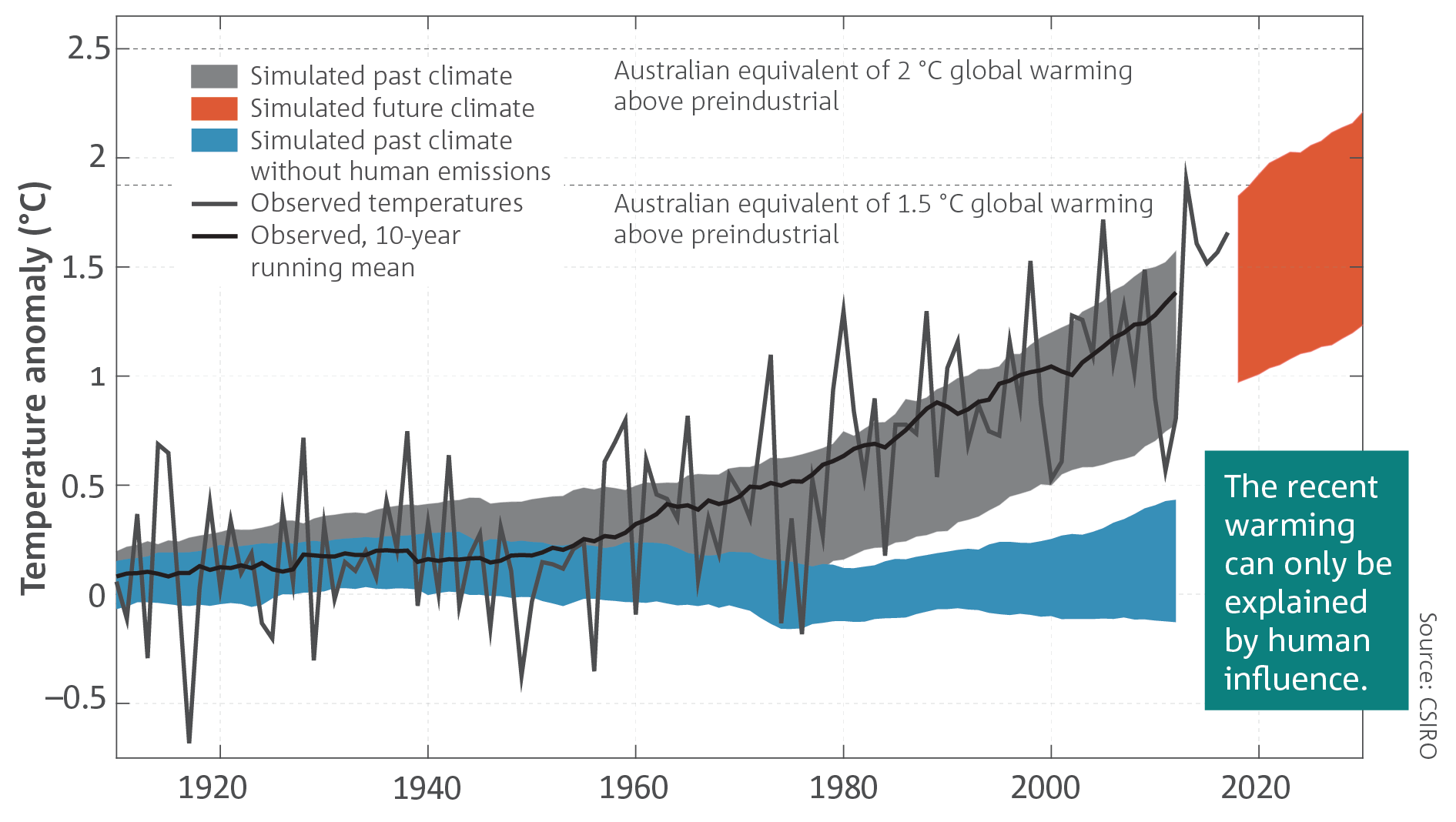 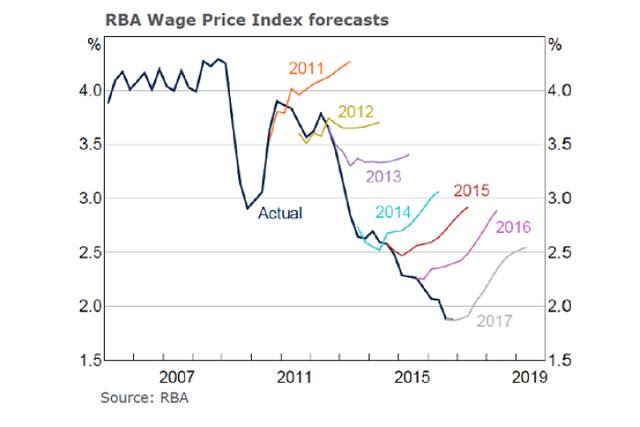 Do I need to explain the difference? One shows real scientists making credible predictions. The other doesn’t. You can figure out which is which.

Consider also the overwhelming failure of economists to predict the 2008 crash. This includes Glenn Stevens, then Governor of the RBA who said in the aftermath:  “I do not know anyone who predicted this course of events.” What that tells us is that ignorance pervaded the circles in which he moved.

Outside those elite circles, there were those who saw it coming. One of them is Australia’s most prominent heterodox economist Professor Steve Keen.  Keen is one of the Post-Keynesians I have mentioned before, as are people like Staphanie Kelton, who was the economic advisor to Bernie Sanders’ presidential campaign, and Australian economist Bill Mitchell. Both Kelton and Mitchell advocate something called “Modern Monetary Theory”, which you might have heard of - it’s been having a moment since the pandemic blew up the economy and forced the government to throw out the rule book. 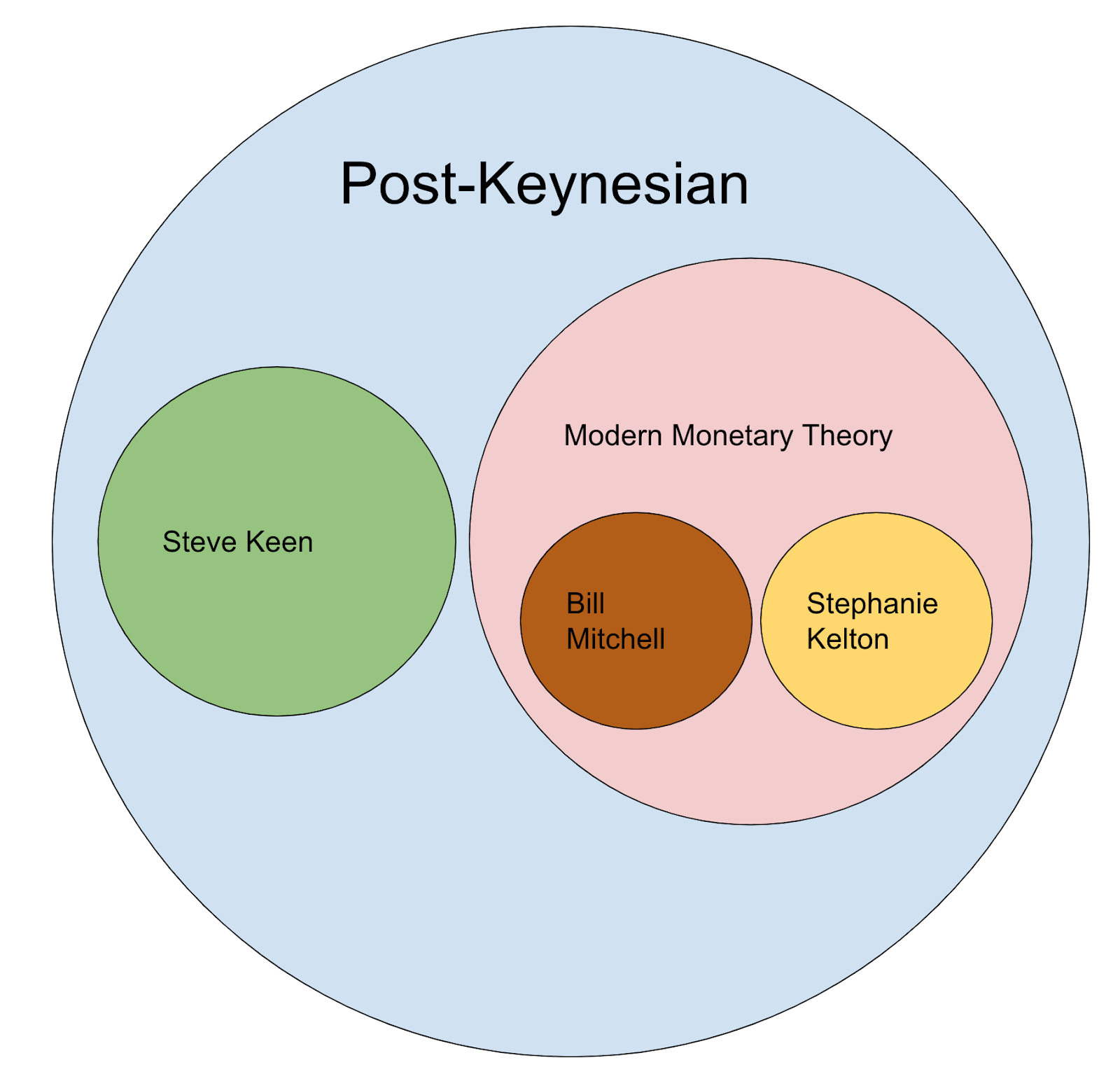 My personal opinion is that while the MMT crowd might be better than the mainstream, especially when it comes to money creation and government spending (they advocate more of both), Keen is better. This is because of his unique focus on the role of private debt in the economy, which is incredibly revealing - and what allowed him to predict the financial crisis of 2008, and causes him to have a far grimmer outlook about our prospects going forward. And his theories do fit with the data. Consider this graph below, showing, as his theory predicts, a strong correlation between the change in debt and the unemployment rate: 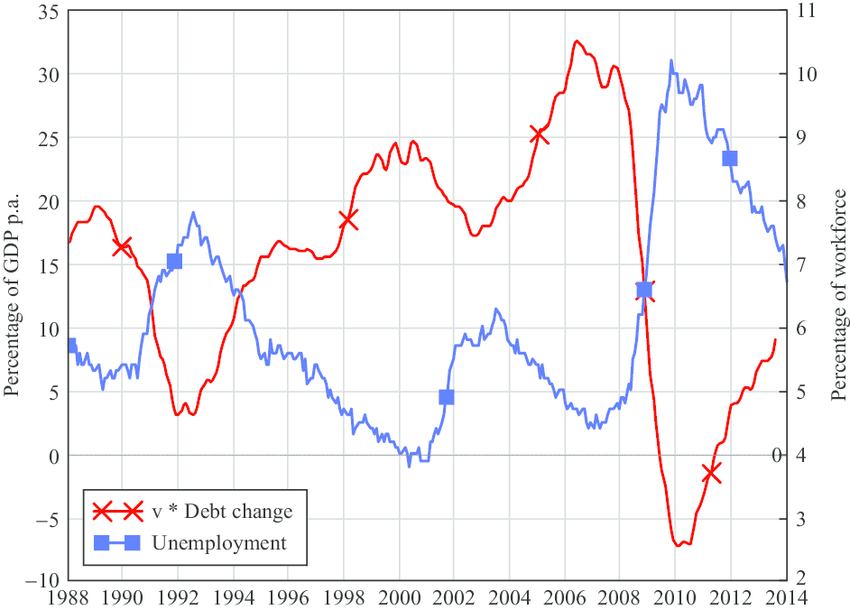 Another thing Keen points out, and this is key, is that debt creation doesn’t just have to increase for economic growth to happen, that increase needs to accelerate (so new loans can cover the interest payments on old ones). This means that, left to its own devices, the economy has nowhere to go but off a cliff. Government spending beyond tax receipts isn’t just (as the MMT crowd argue) permissible to achieve goals like full employment or a transition to sustainable technology; it’s absolutely vital to fend off deflationary spirals like the Great Depression.

What is certain is that economics is up for debate. Don’t let anyone tell you that “there is no alternative” to austerity thinking, or that you should shut up and listen to the experts. Those experts have nothing to be proud of, and some tough questions to answer. Unfortunately our politicians and the media, who mostly accept and propagate the mainstream intellectual monoculture, won’t be asking those tough questions.